skip to Main Content
Watch on demand (only for delegates)

Every year at ILC, EASL acknowledges major scientific contributions made by scientists in the field of liver research.  The EASL Governing Board selects nominees and the recipients receive their awards in the presence of the liver community, during the annual EASL meeting. 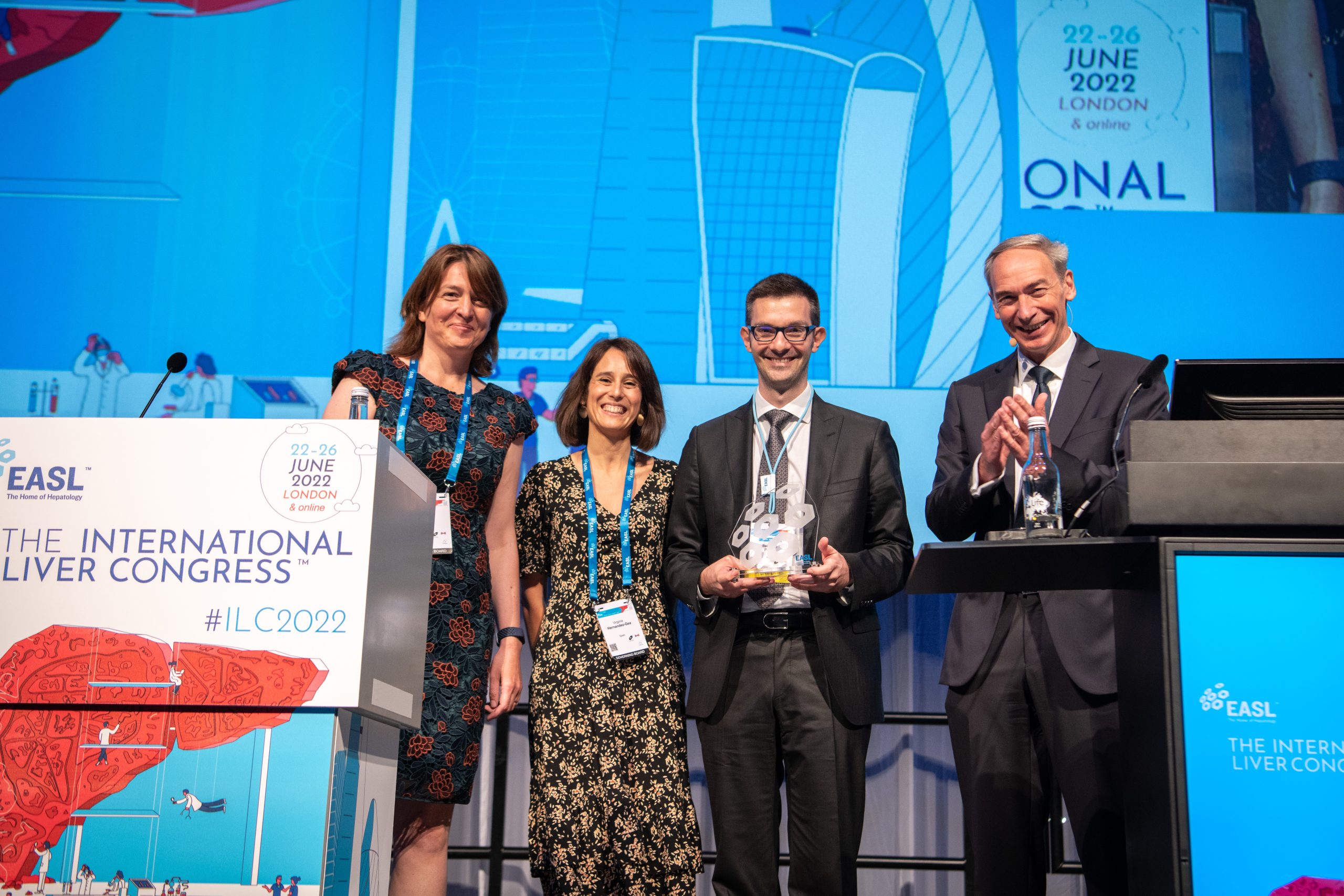 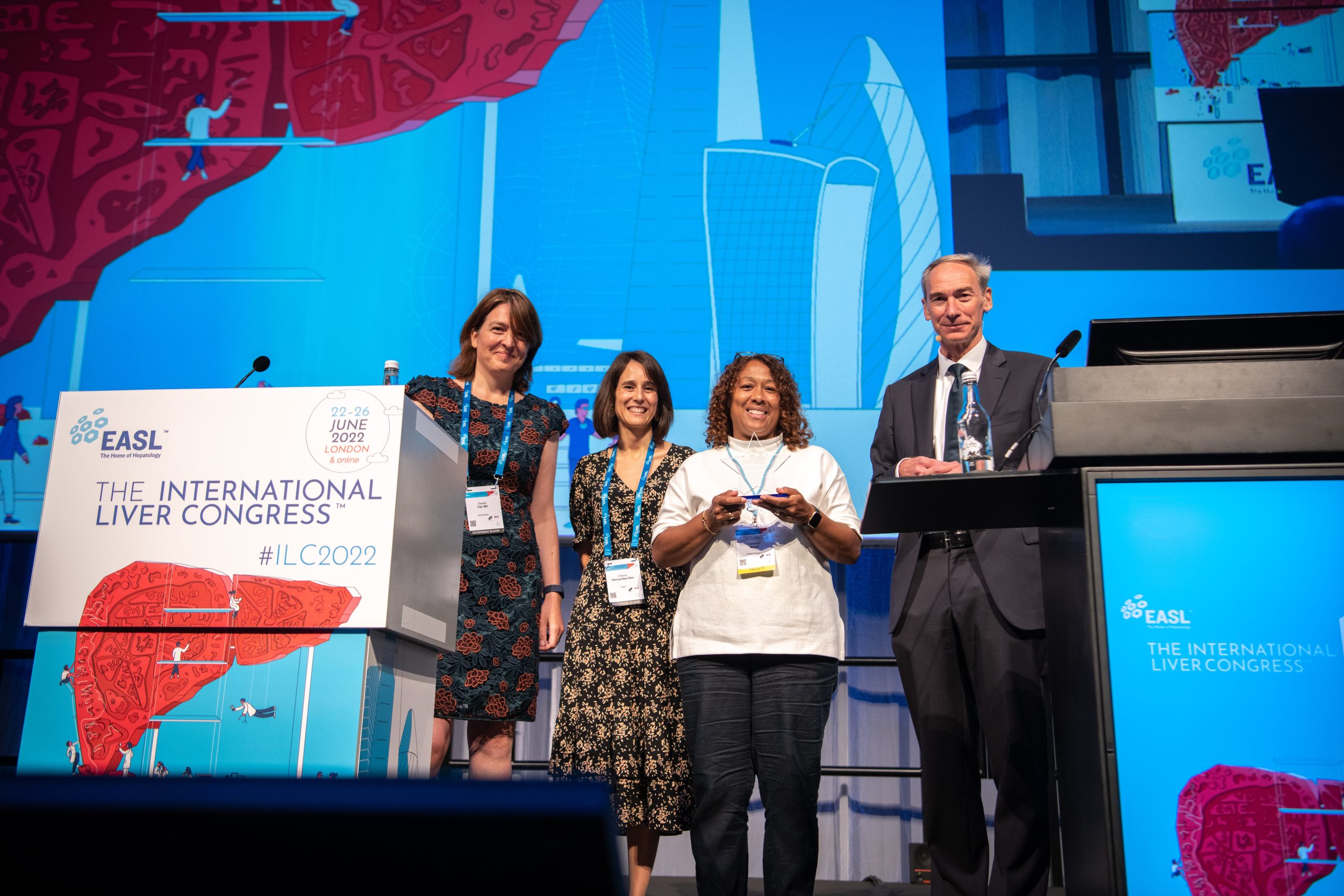 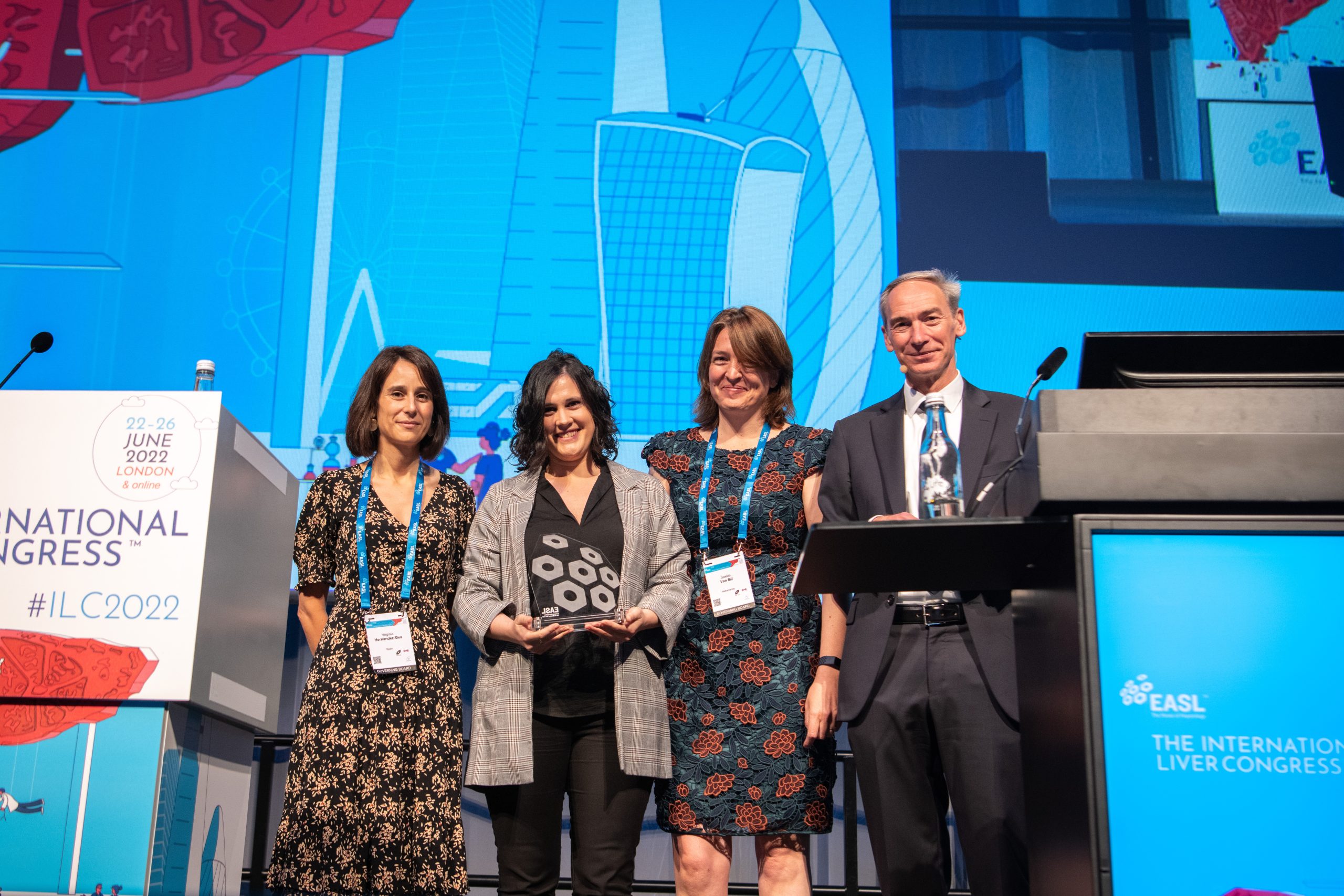 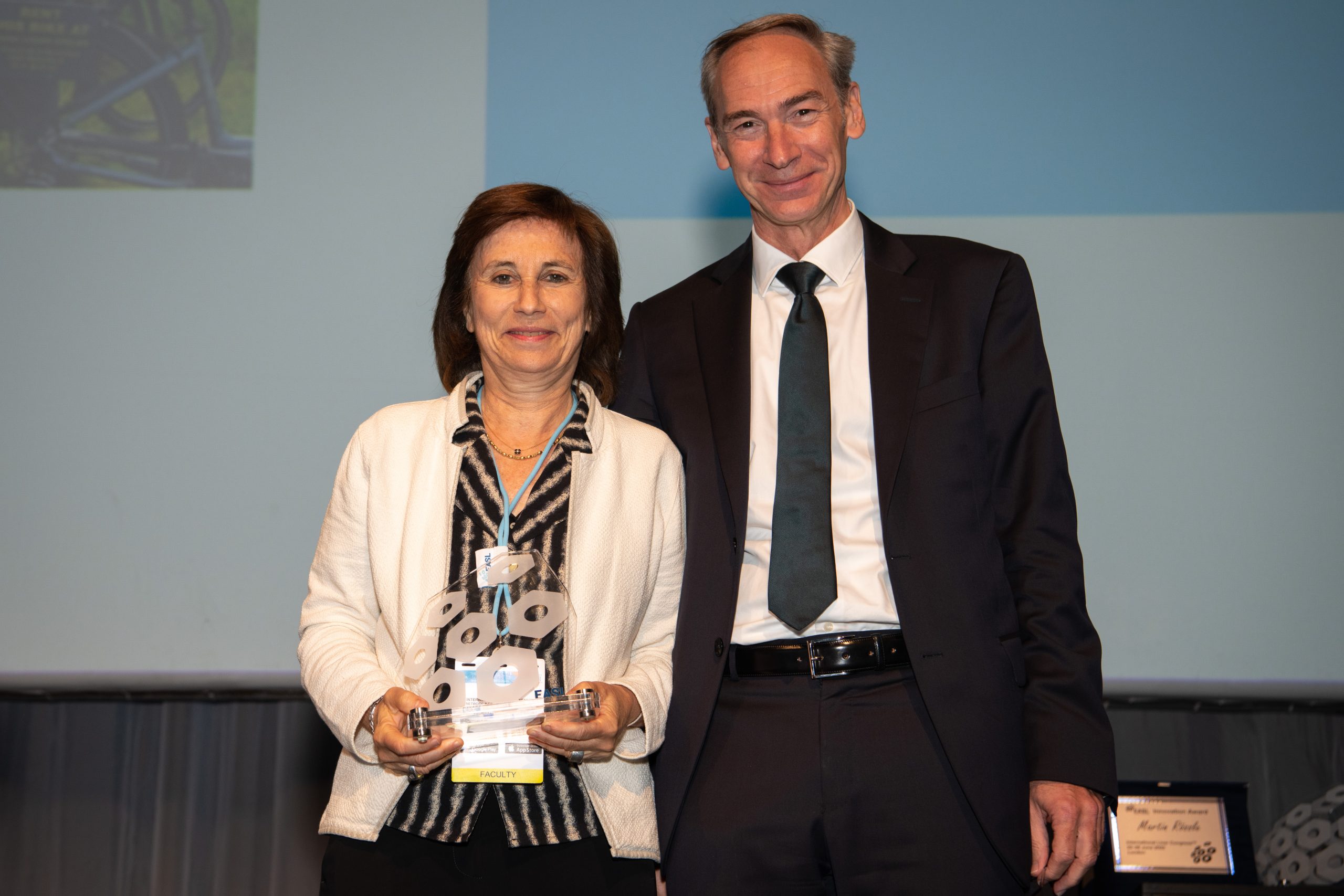 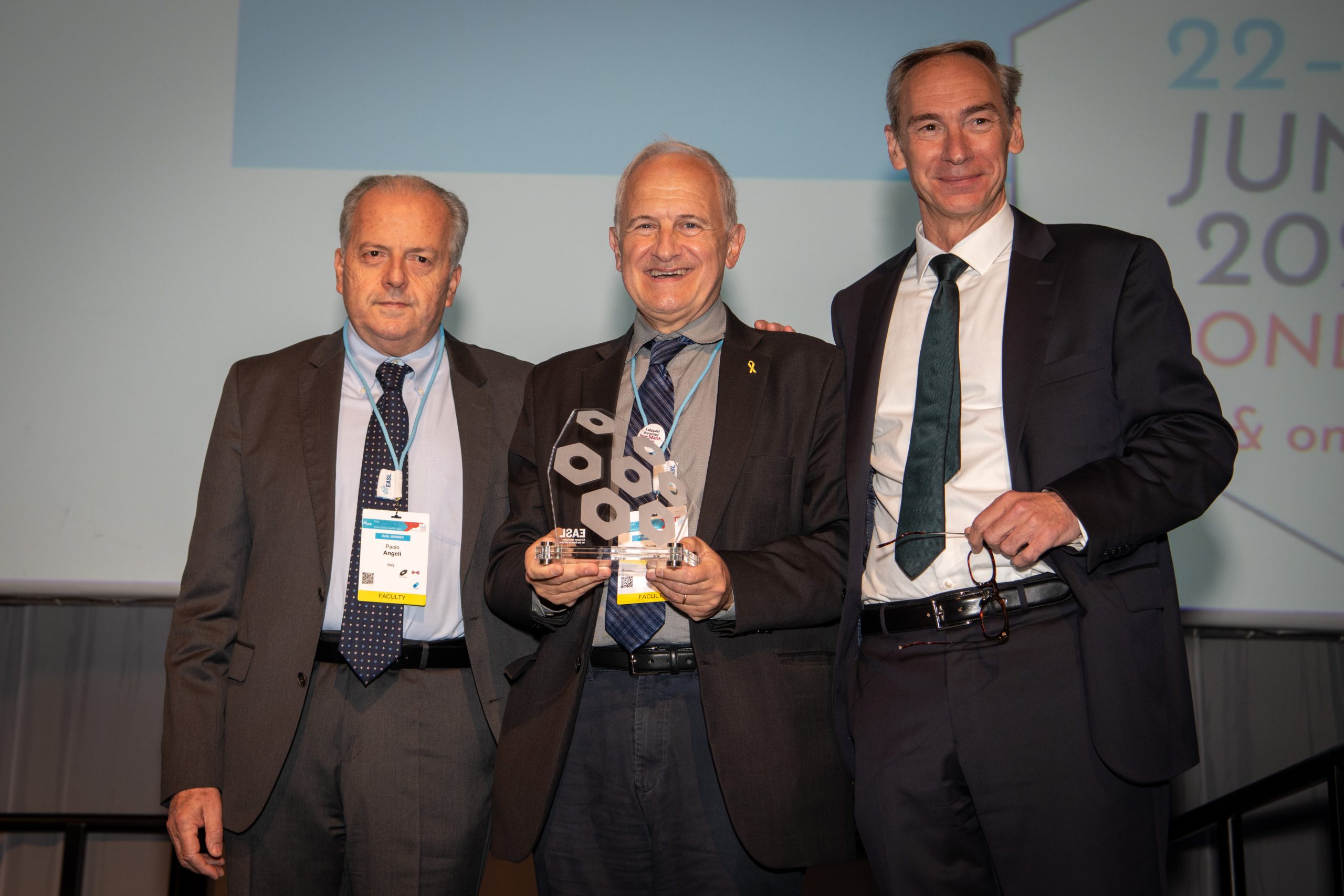 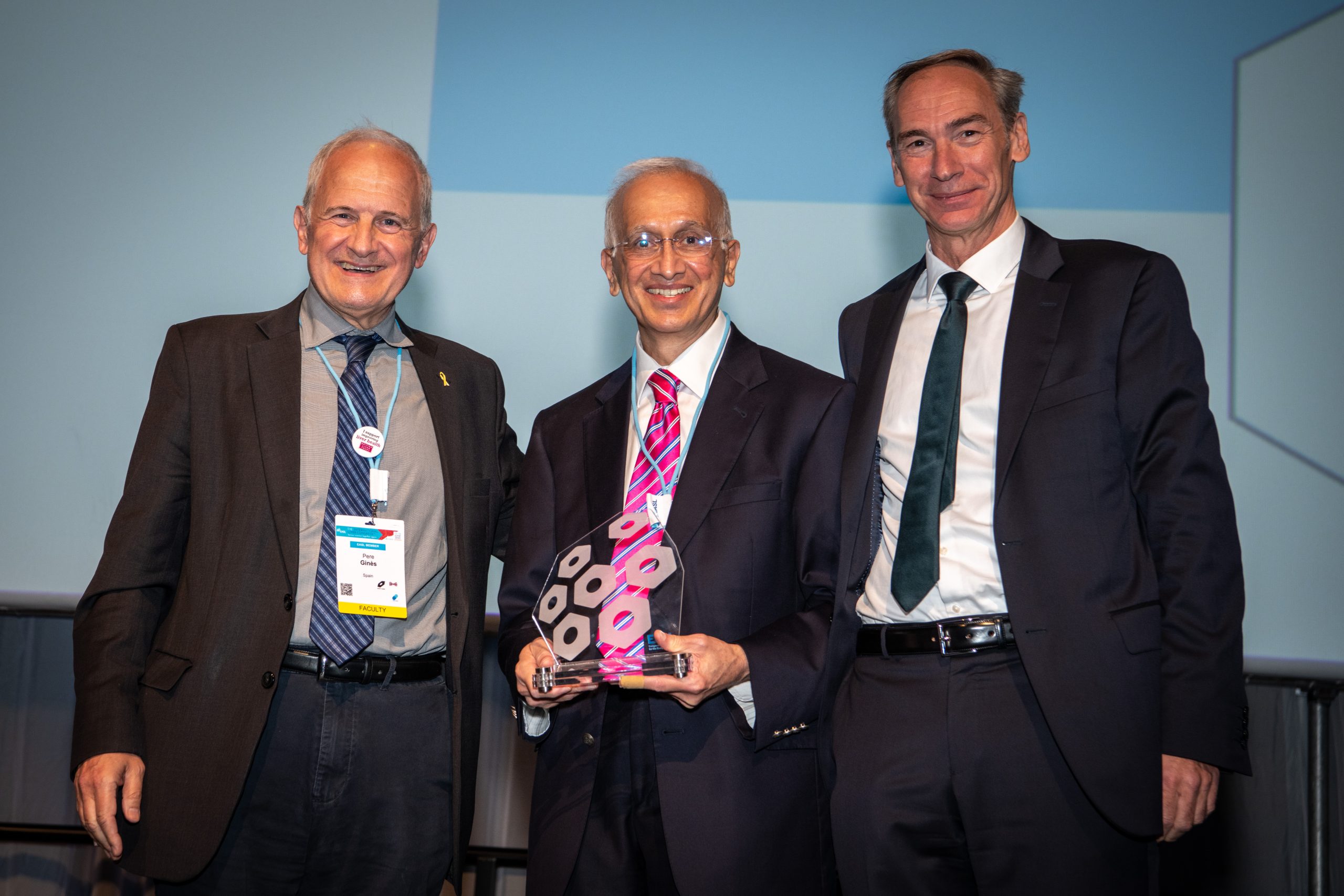 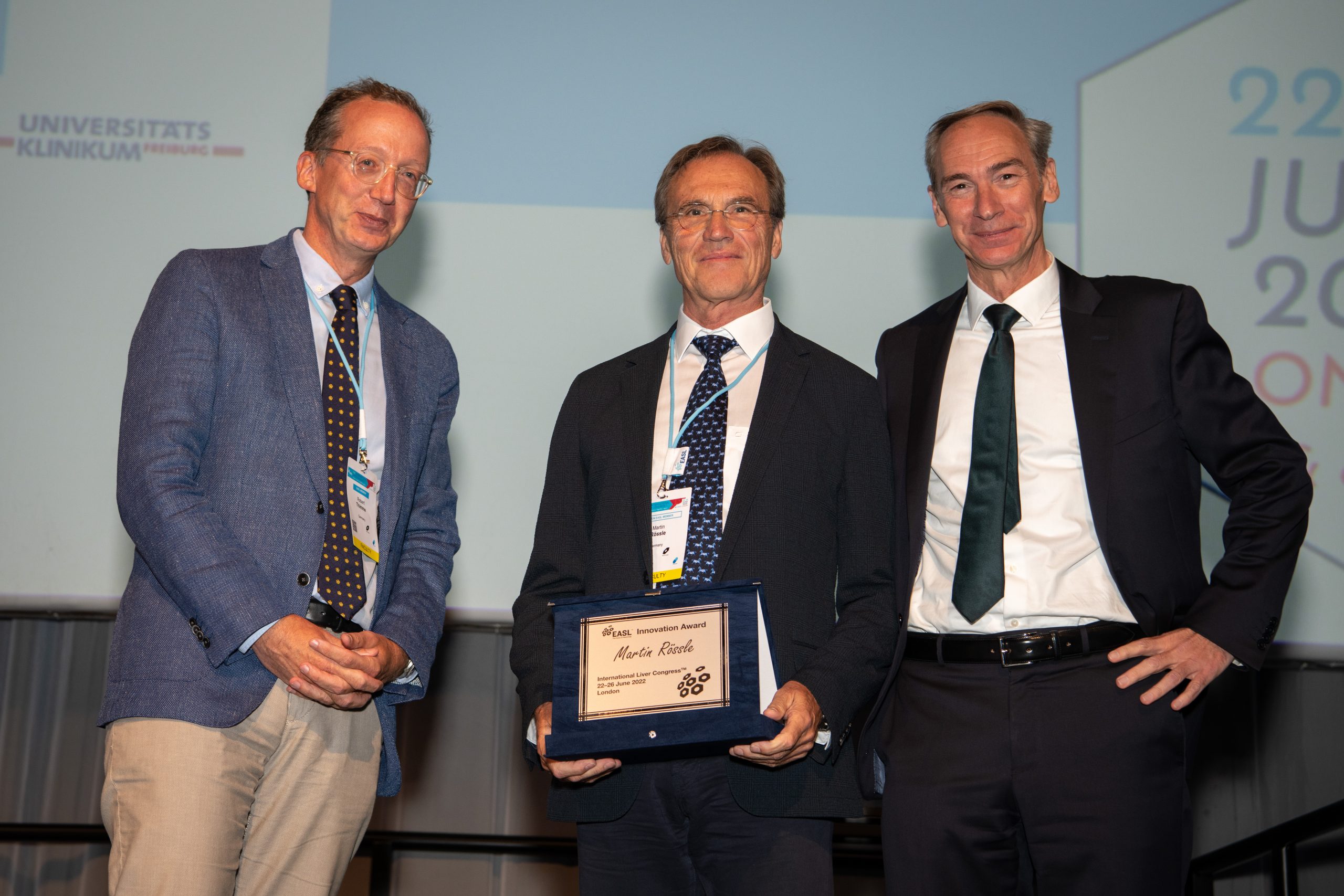 Dr Pere Ginès has devoted his whole career to treating patients with liver diseases and in particular patients with complications of cirrhosis. His clinical experience extends from the management of patients in the ICU and general ward as well as outpatient clinic. Since 2005 he has been the Chairman of the Liver Unit at Hospital Clinic of Barcelona and in 2007 he was made a Full Professor Medicine, University of Barcelona. He has mentored and directed 20 doctoral theses.  As a clinical investigator, he has spent the past 30 years focusing his research on complications of cirrhosis and is a leader in the field of ascites, hepatorenal syndrome  and bacterial infections.  Another area of interest has been the biology of hepatic stellate cells and the pathogenesis of liver fibrogenesis. His scientific career has taken place in two institutions: the Hospital Clinic of the University of Barcelona (Barcelona, Spain) and the University of Colorado (Co, USA). The scientific output of his group includes more than 200 original articles published in international journals. He has chaired and been a member of different committees to establish Guidelines of diagnosis and therapy of complications of liver cirrhosis. Since its start in 2008, he has been the Scientific  Secretary of the EASL CLIF Consortium helping to develop and stimulate research into chronic liver failure.

Patrick S. Kamath MBBS, MD, DM is Professor of Medicine and Consultant in Gastroenterology and Hepatology at the Mayo Clinic College of Medicine and Science, Rochester, Minnesota since 1991. He graduated in 1976 from St John’s Medical College in Bangalore and subsequently, underwent postgraduate training at the Postgraduate Institute of Medical Education & Research (PGIMER) in Chandigarh, the premier medical post-graduate training Institute in India. He received the Jane and Camillo Patrao Prize in Medicine at St John’s Medical College, and the Kataria Gold Medal (an award for the most outstanding postgraduate student) at the PGIMER.  He completed both his MD in Medicine (1980) and is DM in Gastroenterology (1982) at the PGIMER.  On his return to Bangalore in January 1983 he joined St John’s Medical College, Bangalore University and quickly rose to the position of Associate Professor and then Professor and Chief at the Department of Gastroenterology. At a national and international level, Patrick S. Kamath has been honored with the Distinguished Educator Award of the American Gastroenterology Association in 2015 and the Distinguished Educator/Mentor award of the American Association for the Study of liver Diseases in 2018. He delivered the Eugene Schiff oration at the AASLD annual meeting in 2017.

Professor Kamath’s academic research has appeared in top-ranking journals including the New England Journal of Medicine, Nature Genetics, the Lancet, British Medical Journal, Gastroenterology, Hepatology, and the Journal of Hepatology.  He has served as Associate Editor at different times for the foremost journals in the field: Hepatology, Clinical Gastroenterology and Hepatology, and Journal of Hepatology. He is currently Associate Editor for Gastroenterology. With more than 600 papers to his name, he has published widely in various fields, but particularly in the study of clinical outcomes related to cirrhosis and portal hypertension, vascular diseases of the liver, and polycystic liver disease.  He has written over 100 chapters in standard texts.  However, he is mostly known for his work in the development of the Model for End-Stage Liver Disease (MELD) score.

Sophie Lotersztajn is the deputy director of the Center for Research in Inflammation (Bichat and Beaujon Hospitals, Paris), an institute dedicated to basic and clinical research in inflammatory diseases. She also leads a group focusing on the liver wound healing response, which is a founding team of the laboratory of Excellence Inflamex. She received a PhD in Physiology in 1985 at the Université de Paris on calcium signaling in liver physiology. After training in Mc Master University and University of Liverpool, she obtained a research scientist and then a director of Research position in 1994 at the Institut National de la Santé et de la Recherche Médicale (INSERM). She is recognized for her pionneer basic and translational work on liver fibrosis, that led to the identification of new targets and pathways for antifibrotic therapy. She has chaired several national and international boards, and coordinated numerous national grant programs on liver research. In addition, she has been an associate Editor for Am J Physiol (2008-2018) and J Hepatol (2015-2017). She served as a co Editor for J Hepatology (2018-2019) and currently acts as a co-Editor for JHEP Reports.

The main research line of Dr. María J Perugorria, Principal Investigator in the Liver Diseases Group at Biodonostia Health Research Institute (HRI), has been focused on the study of chronic liver damage and liver cancer.
María J Perugorria is licentiate in Biology (2003) and Biochemistry (2004) and Doctor in Biology (2009) from the University of Navarra (Pamplona, Spain). Her Doctoral Thesis at the University of Navarra (2004-2009) was focused on the study of the molecular mechanisms involved in the progression of liver injury, with special interest in the signaling pathways involved in the development of liver fibrosis and hepatocarcinoma. She obtained the Doctorate in Biology with the highest grade of Excellent “Cum laude” and received the Extraordinary Doctorate Award in 2009.
Afterwards, Dr. Perugorria carried out a postdoctoral stay in the laboratory of Prof. Derek Mann (Fibrosis Research Group, Faculty of Medical Sciences of Newcastle University, UK), a worldwide expert in the study of liver fibrosis and cancer, at Newcastle University (Newcastle upon Tyne, UK: July 2009 -Sept 2012). Moreover, she has also carried out shorter stays (1-3 months) in the University of Paris (Paris, France: January 2007-March 2007), and in the University of Vienna (Vienna, Austria: Feb 2012-April 2012 and June 2015-July 2015).
In November 2012, Dr. Perugorria joined the Hepatic Diseases Group at the Biodonostia HRI (San Sebastian), which is led by Dr. Bañales, to create and lead a new research line focused on the study of the molecular mechanisms involved in the progression of chronic liver damage and liver cancer. This fact was reinforced after obtaining the competitive IKERBASQUE Research Fellow (Basque Foundation for Science) in December 2013 (2014 – 2018). Since January 2017, Dr. Perugorria is a Ramón y Cajal Fellow, which has given her the stability to carry out her research projects.
During her research career, she has published more than 60 manuscripts in top scientific journals in her field of research, receiving more than 3000 citations. She has a Hirsch Index of 28. During her research career she has presented more than 100 abstracts in National and International Congresses, as well as participated in dissemination activities. With regard to teaching activities, Dr. Perugorria has supervised 5 Doctoral Thesis (4 with International Mention), 5 Final Master Projects in the University of Navarra (3), UPV/EHU (1) and the University of Barcelona (1), 4 of them receiving the maximum qualification of 10/10. She is currently supervising the Doctoral Thesis of another 3 PhD students.
She has been Member of the Reviewing Board (Abstract Reviewer) of the EASL International Liver Congress (2018-2020), the United European Gastroenterology, UEG Week (2019-2021) and the Spanish Asociación Española para el Estudio del Hígado, AEEH (2021-currently) and has actively participated in the creation of the European Network for the Study of Cholangiocarcinoma (ENS-CCA). Recently, Dr. Perugorria has been invited to give state of the art lectures in National (42nd Congress of SEBMM, Madrid 2019 / I Reunión de Hepatología Traslacional de la AEEH, San Sebastian 2019 / V UIMP-IBIS School of Biomedicine Sevilla 2019) and International Meetings (EASL ILC Vienna 2019 / UEG Week Barcelona 2019 / EASL Liver Cancer Summit Prague 2020 / 107th Meeting of the JSGE Tokyo 2021), which are testament of her leadership qualities in the field of liver cancer.
Of note, Dr. Perugorria has received the prestigious International Award “UEG Rising Star 2019” that recognizes the trajectory of the best European researchers with less than 40 years in Gastroenterology. Recently, she was also awarded the “Women in Science Recognition 2020” for her relevant contribution in science of the Basque Country.

Salvatore Piano is Assistant Professor of Medicine and Consultant Hepatologist at the University Hospital of Padova, Italy.

He is past member of EASL YI Task Force, and current member of the International Club of Ascites steering committee and EF-Clif consortium Inspiring and Writing Board.

He has participated as faculty at consensus meetings about diagnosis and management of acute kidney injury in cirrhosis (International Club of Ascites), endpoints in clinical trials in decompensated cirrhosis (LIVERHOPE consortium), personalized care in portal hypertension (Baveno VII).

He is Associate Editor of Liver Transplantation and Clinical and Molecular Hepatology. He is member of the Editorial Board of the Journal of Hepatology and JHEP Reports.

Dr. Martin Rössle gained his medical degree in 1976 from the University of Freiburg, Germany. After a 2-year postdoctoral fellowship in the Biochemical Institute, he began his clinical career in the University Hospital Freiburg as a gastroenterologist and hepatologist. He obtained several grants from the Deutsche Forschungsgemeinschaft (DFG) and a research fellowship in 1985 and 1986 at the National Institute of Health (NIH), Bethesda, USA. In 1988, Martin Rössle initiated and conducted the first TIPS implantation in Freiburg  together with Götz Richter, Gerd Nöldge, and Julio Palmaz. Since then, Martin Rössle has performed more than 2000 TIPS interventions.

I am a Hepatology clinical nurse specialist qualifying from The Royal Free Hospital London in 1995. I have been working within the field of digestive disease for 20 years with 6 years specialising in Liver nursing in the UK. I have a BSc in Health Studies and currently work for The Royal Cornwall Hospital NHS Trust, having recently taken up the position in a novel role as a Virtual Hepatology CNS. I am a current serving committee member for BASL/ British Liver Nurses association and have recently been elected to serve on the BASL Inclusivity working group. I have a particular clinical interest in NAFLD/NASH and leadership interests in developing and improving clinical services and sustainable healthcare.