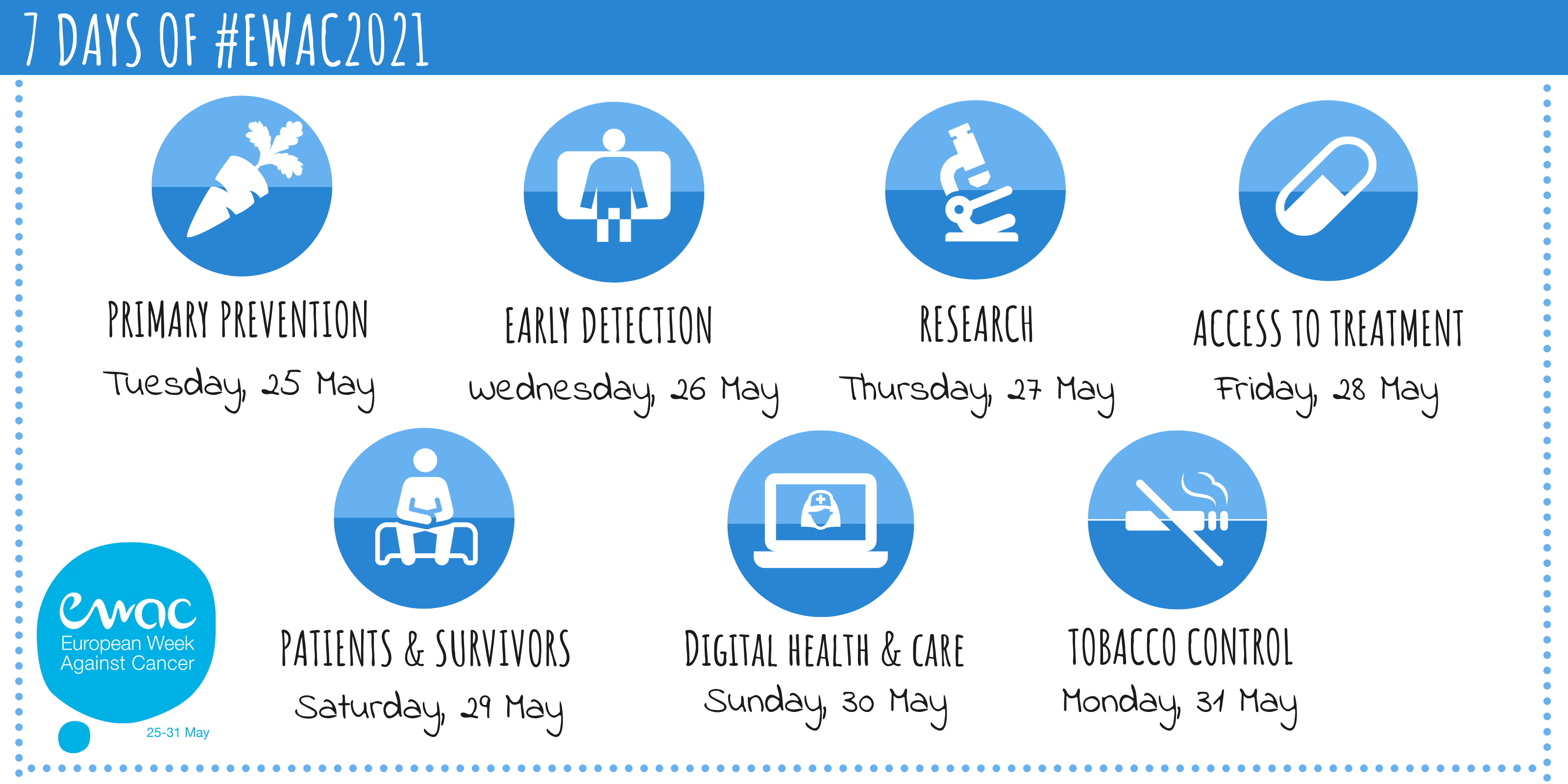 31 May 2021
This European Week Against Cancer, EASL has contributed in many ways to tackling liver cancer: signing a joint-society statement, contributing to a White Paper, and taking part in several webinars.

About the European Week Against Cancer

Every year, from 25 to 31 May, European Week Against Cancer (#ECAW) is held to unite Europe in the fight against cancer, under the one banner. The occasion serves to encourage all parties across Europe concerned – individuals, organisations, and governments – to raise awareness and educate the wider public about cancer and cancer issues, and to promote achieving a Europe free of cancer.

The week concludes with World No Tobacco Day, today.

During ECAW 2021, together with many other medical associations, EASL expresses full support of the statement made by the European Chronic Disease Alliance (ECDA): Implementing Europe’s Beating Cancer Plan means turning goals for improved chronic disease prevention into reality.

This statement focuses on preventable measures to be implemented at the EU level, with special attention being paid to the protection of Europe’s current and future generations, and underlining the urgency of implementing actions without delay.

How did EASL shine a light on the liver during EWAC 2021?

How is EASL engaging with the European Cancer Organisation, to mitigate liver cancer?

Recently, EASL became a member of the European Cancer Organisation (ECO), which aims to reduce the burden of cancer and improve outcomes and quality of care for cancer patients, by drawing on multiple disciplines and professions. EASL is involved in the ECO’s primary prevention network, which held a meeting on 28 May to encourage members of the group to share and thereby amplify existing initiatives.

EASL was represented by Vice Secretary-General, Prof. Thomas Berg, who underlined the burden of primary liver cancer – one of the few cancers increasing in both incidence and mortality. Liver cancer, however, is highly preventable by tackling liver diseases and their progression, such as to liver cirrhosis.

Liver cancer prevention is a perfect example of how cancer can be tackled by prevention,

On 26 May, in a webinar on preventing cancer-causing virus infections, Prof. Maria Buti, EASL’s EU Affairs Councillor and Chair of the Policy and Public Health Committee, spoke on “Preventing cancer by tackling hepatitis”.  Prof. Buti underlined that worldwide, liver cancer is the fifth most common cancer among men, the ninth most common cancer among women, and the second most common cause of cancer death for men and women combined. She emphasised that the risk of liver cancer caused by chronic hepatitis B and C infections could be dramatically reduced by preventing and treating viral hepatitis.

Viral hepatitis often goes unnoticed, showing no symptoms. Thus people may live with a major cause of liver cancer, without even knowing it. Screening is key for those who are at risk!

In a closing webinar held on 31 May on cancer prevention, screening, and early detection, Prof. Nick Sheron, EASL’s Policy and Public Health Committee Member and expert on alcohol, spoke about the cancer risks associated with alcohol consumption. He poses the question: “How many cigarettes are there in a bottle of wine?”

Presently, nine in ten people are entirely unaware that alcohol causes cancer. In terms of cancer risk one bottle of wine (10 cl alcohol) is equivalent to smoking five cigarettes for men and ten cigarettes for women,

During Awareness Week on Alcohol-Related Harm (AWAR) 2020, EASL helped raise awareness of the damage of alcohol, compared to tobacco.

EASL contributes to a White Paper on cancer-related comorbidities

Download this White Paper, in lay and full versions.

How else is EASL supporting Europe’s Beating Cancer Plan?

EASL highlights the importance of preventing hepatitis transmission (hepatitis B and C), both major risk factors for liver.  The Plan recognises not only vaccination against viral hepatitis B, but also the treatment of viral hepatitis C, as key methods to prevent cancer. Extra measures and supports for new initiatives at EU level are nonetheless needed to tackle liver cancer caused by viral hepatitis.