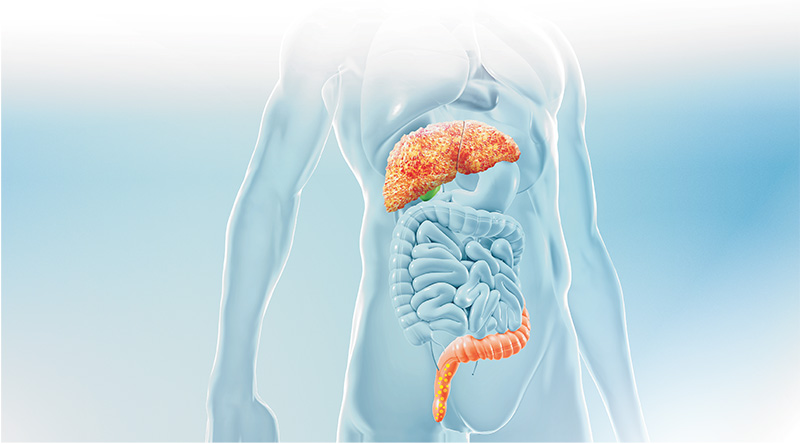 Researchers from EF Clif identify the causes that precipitate the onset of the most serious stage of cirrhosis: the syndrome of Acute-On-Chronic Liver Failure (ACLF).

Barcelona, December 9, 2020 – A new investigation of the PREDICT study, which was led and coordinated from Barcelona by Prof. Jonel Trebicka, MD, PhD, (Goethe University Frankfurt) a clinical researcher of the European Foundation for the Study of Chronic Liver Failure (EF Clif), identifies that bacterial infections and severe alcoholic hepatitis, both independently and in combination, are the main precipitants that cause the development of acute decompensated cirrhosis and Acute-on-Chronic Liver Failure (ACLF), the most serious phase of cirrhosis.

ACLF occurs in up to 96% of the cases analysed, according to the results of this work published in the Journal of Hepatology and carried out within the framework of the PREDICT study, a prospective, observational, European-wide project that seeks to identify the clinical course of decompensation with the aim of predicting the development of the ACLF syndrome. The research has involved 136 researchers from 47 hospitals in 15 European countries from the EASL-CLIF Consortium.

Up to now, it was thought that acute decompensation in cirrhosis was initiated due to a severe worsening of stable cirrhosis, as a consequence of different precipitating events. In 2013 the CANONIC study characterised the ACLF syndrome as the most severe phenotype of acute decompensated cirrhosis. Recently, the first investigation of the PREDICT study demonstrated that acute decompensated cirrhosis manifests through different clinical phenotypes. Many investigations from both studies demonstrated that systemic inflammation induces multiple organ dysfunction and results in the different clinical phenotypes such as Pre-ACLF and ACLF.

Regarding the influence of the precipitating events on the mortality of patients with acute decompensated cirrhosis and ACLF, the researchers detected that the number of identifiable events is associated with an increase in mortality at 90 days. To the contrary, the type of precipitating event does not influence patient survival.

Improving the treatment of patients with acute decompensated cirrhosis

The discovery made by the group of researchers led by EF Clif opens the door to an improvement in the management of these patients. Taking into account that more than 96% of them showed proven bacterial infection and/or severe alcoholic hepatitis as the main precipitating events, independently or in combination with other factors, the results suggest that diagnosing, preventing and treating these causes are essential to improve the prognosis in acute decompensated cirrhosis.

Furthermore, the study shows that adequate first-line antibiotic treatment of proven bacterial infections is associated with a lower rate of ACLF development (21.3% vs 39.2%). This is a novel and remarkable finding according to Javier Fernandez (Hospital Clinic Barcelona, Clinical researcher at EFClif) the shared first authorship and expert in infections. Moreover, adequate first-line antibiotic therapy was associated with a lower mortality at 90 days, both in patients with acute decompensated cirrhosis (16.9% vs 36.5%) and in patients with ACLF (44.2% vs 66.2%).

Jonel Trebicka, principal investigator of the PREDICT study at the EF Clif stated that:

The identification of these precipitating events allows us to approach the diagnosis of patients with greater certainty, developing specific preventive and therapeutic strategies aimed at controlling the precipitating events that we have detected and ultimately improve their quality of life.

You can read the article “PREDICT identifies precipitating events associated with the clinical course of acutely decompensated cirrhosis“, by Jonel Trebicka et al, published in the Journal of Hepatology, 19 November 2020.

For more information, please contact:
Joël Walicki, PhD
Head of Publications
European Association for the Study of the Liver

About the PREDICT Study
The PREDICT study was designed to prospectively observe patients with acute decompensation at risk of developing ACLF, over a three-month period and to discover predictors  and clinical, laboratory, and physiological mechanisms (using prospective auxiliary studies) involved in the development and clinical course of ACLF, which could help prevent and treat this condition.

A project involving 47 organisations and institutions from 15 European countries
The team that works on this study, led by EF Clif, is composed of 136 researchers from various European centres and agencies.

About decompensated cirrhosis and the ACLF
Acute-on-chronic liver failure (ACLF) represents the most serious phase of cirrhosis, characterised by intense systemic inflammation in which patients develop failure of different organs or systems. ACLF is the main cause of death in cirrhotic patients and has a great socioeconomic impact, due to the high volume of health resources that the treatment requires and because it incapacitates the patient from work. The syndrome was described for the first time in 2013 by the same authors of the PREDICT study (Moreau R, Jalan R, Ginès P, Pavesi M, Angeli P, Cordoba J, et al. Acute-on chronic liver failure is a distinct syndrome that develops in patients with acute decompensation of cirrhosis. Gastroenterology 2013; 144). Currently, it is understood that mortality is due to decompensated cirrhosis, characterised by the appearance of complications such as ascites, gastrointestinal bleeding and disorders of brain function that can lead to hepatic coma and which usually progress to ACLF.

Recent research led by the European Consortium for the Study of Chronic Hepatic Failure has shown that ACLF is a highly complex disorder appearing in patients with liver cirrhosis. In addition to the liver failure, cardiovascular, renal, and brain function, pulmonary, intestinal, adrenal, and immune system may fail in these patients. It is, therefore, a special form of multi-organ failure.

The probability of survival after the onset of the syndrome is low, since it is associated with high short-term morbidity (30% at 28 days) and the only treatment at present is liver transplantation.

The EF Clif was created in 2015 to support the research work carried out by the EASL Clif Consortium, a research network of more than 100 European University Hospitals and 200 clinical investigators. In 2013, the Consortium described a new syndrome: Acute-on-Chronic Liver Failure (ACLF), which is the most common cause of death in cirrhosis.

To find out more about the EF Clif: http://www.efclif.com
Twitter: @ef_clif