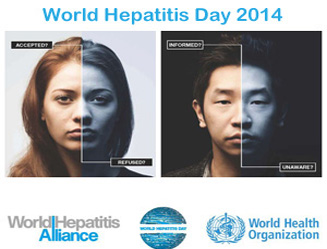 July 28, 2014, JOHANNESBURG—On World Hepatitis Day, 22 organisations and individuals from around the world have called on the South African Department of Health (DOH) and Department of Trade and Industry (DTI) to address the public health threat of hepatitis, by implementing hepatitis B immunisation at birth, and reforming national patent laws to promote access to more affordable hepatitis therapies.

Hepatitis B is highly endemic in South Africa and across sub-Saharan Africa, where around 8% of people are chronically infected, and the rates of hepatitis B-related liver cancer are some of the highest in the world. Globally, viral hepatitis causes approximately 1.3 million deaths every year—more than either malaria or tuberculosis—with around 240 million people chronically infected with hepatitis B virus (HBV), and 140 million people with hepatitis C virus (HCV). Either of these viruses can result in liver failure and liver cancer.

“Preventing infant infection is undoubtedly the most important way to reduce the prevalence of the hepatitis B virus,” said Dr. Monique Andersson, a virologist at Stellenbosch University. “A safe, effective, and affordable hepatitis B vaccine has been available for over two decades, and remains the backbone of prevention strategies. Yet infants continue to be infected across sub- Saharan Africa because they don’t receive the immunisation early enough.

The World Health Organisation recommends infants be administered an initial vaccination against hepatitis B within 24 hours of birth to prevent HBV infection in the initial weeks of life. This “birth dose” reduces mother-to-child transmission of HBV. Studies in Africa suggest transmission is currently between 2-30% of infants born to HBV-infected mothers. However, in much of sub-Saharan Africa the birth dose has not been implemented and HBV vaccine coverage remains low. “The DOH needs to set an example for the region,” said Andersson. “It’s time South Africa and other countries add a hepatitis B birth dose to the national immunisation agenda.”

For individuals already infected with hepatitis, there is also a critical need for key hepatitis treatments to be available at more affordable prices. Entecavir, for example, is an effective treatment for hepatitis B for those with kidney impairment, but the drug is only available in South Africa from multi-national pharmaceutical company, Bristol-Myers Squibb (BMS), which charges monopoly prices. Entecavir is not readily available through the public sector, and drug costs in the private sector for treating a hepatitis B patient range from R4,700-R5,500 per month. In India, by contrast, where generics are available, the costs of treating a hepatitis B patient with entecavir are much lower—between R400-R800 per month.

The initial patent on entecavir expired in South Africa in 2011, which should have permitted lower-cost generic competitors to enter the market. However, BMS holds additional patents on entecavir in South Africa that do not expire until 2022, at the earliest. While the price remains high, the product remains out of reach for those who need it.

“South Africa doesn’t examine patent applications, so we grant monopolies to companies for things that aren’t new or innovative—patents that other countries wouldn’t grant,” said Anele Yawa, General Secretary of the Treatment Action Campaign. “An entecavir patent was recently overturned in the United States, but if it is filed in South Africa, it is likely to be granted to BMS. Examples like entecavir show how urgently the DTI needs to finalise a national policy on patent laws that prioritises public health needs, so the Patents Office rejects frivolous applications.”

The following organisations and individuals have endorsed this statement for World Hepatitis Day, calling on governments in South Africa and across the region to prioritise strategies that will support the eradication of hepatitis B mother-to-child transmission, and develop intellectual property policies that prioritise public health needs and promote medical innovation for affordable and adapted products:

European Association for the Study of the Liver (EASL)

Latin American Association for the Study of the Liver (ALEH)